Extraordinary Food and Medicine From The Ocean

O.K. today let’s talk about yucky looking/smelling but extraordinary foods that are good for us. Food should be medicine, and when we think of healthy food (and medicine) from the ocean, most of us tend to think of fish, or other living creatures. But that’s not what we’ll be talking about here.

A Gold Mine Has Been Discovered!

…off the coast of British Columbia, Canada.

No, not a rich seam of the mineral itself, or buried treasure from some long wrecked pirate ship.

Rather, some very strange looking but very delicious seafood species which have become the envy of other countries, not only for their taste but for their amazing health benefits.

Kazunoko (commonly known as Herring Roe) is shipped to Japan and is considered a delicacy there due to its crunch which differs from the texture of regular salmon roe or caviar. Healthwise, it is loaded with protein, nutrients, and omega fatty acids. The waters of northern B.C. boast some of the very best and highest quality. It is eaten raw with soy sauce or deep-fried. Salty and delicious. The Pacific Red Sea Urchin, often referred to as “custard of the sea” dwells along B.C’s rocky shores.

Round, spiny, and blackish red they look like spiky balls about the size of a baseball. When cut open they contain five crescent-shaped gold coloured roe pieces.

Rinsed off, this delicacy can be eaten raw and are deliciously sweet with a buttery texture.

Good news for the diet conscious – they are a great source of protein and low in fat and calories. Sea urchin is very versatile recipe-wise.

Pasta dishes, calamari, served with teriyaki sauce, or even served with vanilla ice cream, to name a few. salt and pepper to taste

(pronounced Gooey Duck and yes you read that correctly) are strange, some might venture to say ugly 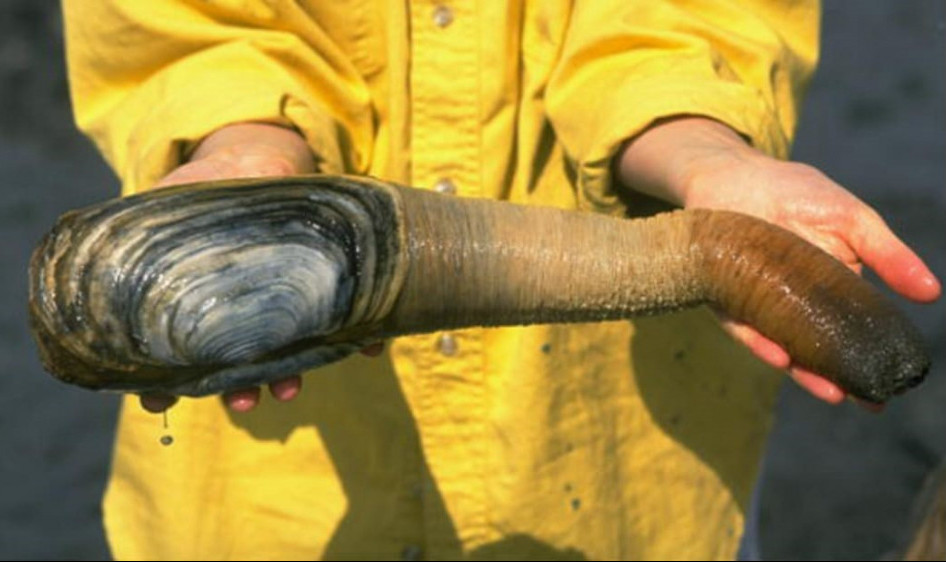 creatures who make up for their unfortunate appearance with flavour and amazing characteristics. They have the distinction of being the world’s largest burrowing clams and boast a lifespan of around one hundred forty years. Found along the coasts of B.C. and Washington state, these amazing creatures outgrow their shells, weigh up to two pounds, and telescope their siphons more than a metre to grab their nutrients. These less than handsome creatures are a lean source of protein and rich in minerals, vitamins, and omega 3. They promote sexual health and possess cancer fighting properties.

The stomach can be boiled but the more adventurous can slice the siphon and belly thinly and eat them raw with lemon juice, olive oil, and chives, as well as using them in stir fries. The texture is crispy and the flavour is salty yet sweet. Specialty retailers sell the product for $20-$30 per pound. 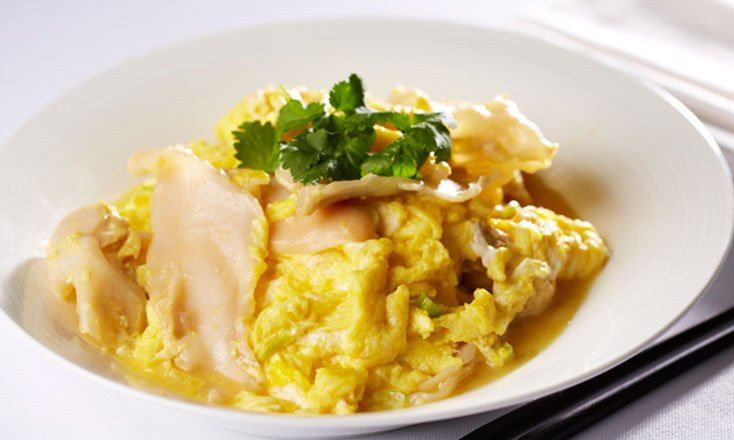 salt and pepper to taste

Put eggs in a bowl and gently whisk. Add salt, sesame oil, and pepper. Halve the geoduck and cut into thin slices. Cook in boiling water for thirty seconds and remove. Heat pan on low and coat with oil. Add eggs and stir-fry until 70% cooked. Add geoduck. Stir in onion.

One of many species off the B.C. coast and running from Alaska to California, this has the 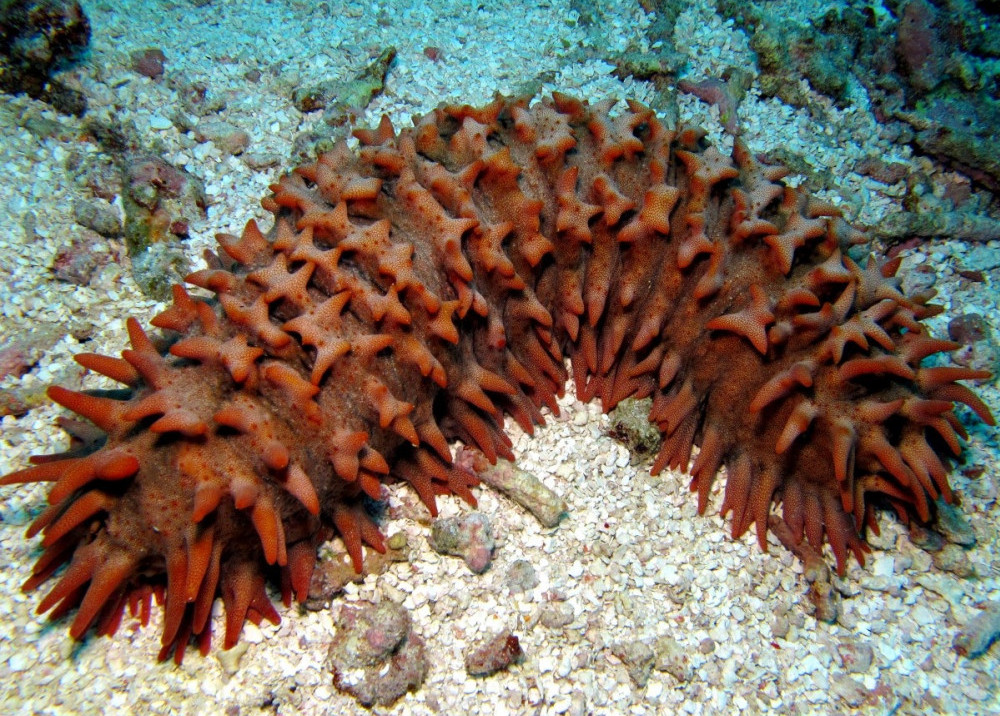 distinction of being the only one harvested for export in the amount of three million pounds per year.

These guys are aptly named as they grow to two feet in length, weighing up to two pounds. They are soft with leathery red skins and rubbery yellow spikes. They have an unusual body configuration that presents in a circle of five sections, with no head or brain.

Multi-use creatures, the skin of the Giant Red Sea Cucumber is used in traditional Chinese medicine for heart and kidney problems. As well they are sought after as aphrodisiacs.

The meat inside is smooth and has a similar appearance to chicken breast meat. Having a bland taste it is conducive to a large variety of recipes. These sea cucumbers are a good source of iron and calcium and are considered a delicacy in Chinese cuisine.

But the winner of the yucky-smelling/looking-foods-which-are-medicine-from-the-ocean category is….

Can you eat seaweed??

Actually, I suppose you can eat anything you want…! That dog clearly does.

Okay, so should you eat seaweed–and why eat seaweed instead of chili cheese dogs?

A global expert, Vincent Doumeizel, called seaweed “the greatest untapped food resource available to humanity.” He also explained, “If you think of seaweed as being slimy, smelly, and unsexy, it is time to get over it. It is a huge source of sustainable food with massive potential.”

How’s that for best medicine from the ocean?

No Dessert Until You Eat Your Seaweed!!

According to a recent study, two percent of the ocean being dedicated to seaweed production would be sufficient to feed twelve billion people. Seaweed is full of protein, Vitamin C and B12, unsaturated fatty acids, and other nutrients.

Seaweed is a general term which describes many different species of algae and marine plants. Although found growing in lakes, rivers, and the ocean, there is a catch. Algae from the sea is edible but freshwater varieties are mostly toxic. So… Eat your seaweed… as long as it is from the ocean! Then you can have some red-flavoured Jell-O with marshmallows and ice cream.

Although relatively new to our culture, seaweed has been an integral part of human diets for thousands of years throughout China and Japan. 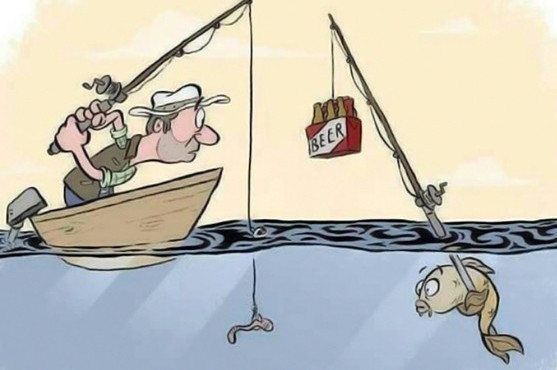 A cross section of seaweed varieties are:

– Sea Lettuce – a type of green Nori resembling lettuce leaves, it is commonly eaten in salads or soups.

– Kelp – brown algae dried into sheets and added to dishes during cooking or used as a substitute for noodles.

– Dulse – red algae with a soft but chewy texture. Adds flavor to dishes or dried as a snack.

– Chlorella – green, edible, and freshwater algae, this is sold as a supplement in powdered form.

Now to the prevention spectrum:

Seaweed helps to promote thyroid function. Your thyroid requires iodine to function properly and seaweed provides that. Failure to get enough iodine from your diet can lead to hypothyroidism. Most people can meet their daily requirement by eating several servings of seaweed per week.

Heart health, reduction of blood clotting, and reduction of blood pressure also occur with the intake of seaweed. As well, a two-month study gave type 2 diabetics a spirulina supplement every day, resulting in their triglyceride levels dropping by 24%. Another study found that Spirulina considerably reduced cholesterol levels. Medicine from the ocean. Yes, Sir.

Here’s some good news for those of us trying to lose weight:

Eating seaweed regularly assists in weight loss due to its ability to affect your levels of the weight regulating hormone leptin. This and seaweed’s high fiber content, help to decrease hunger and enhance feelings of fullness. Seaweed is very low in calories.

This miraculous plant contains marine plant compounds which have antioxidant, anti-allergenic properties which protect you from   infections.

Animal studies show that taking seaweed supplements may improve the amount of healthy bacteria and reduce the amount of harmful bacteria in the gut more effectively than other types of prebiotics.

Now for the inevitable disclaimer:

Some varieties of seaweed can contain high levels of mercury, cadmium, and lead, apparently. The US FDA “regulates” the levels of these chemicals in fresh seaweed, allegedly.

They sure are amazing.

Since seaweed contains Vitamin K, it may interfere with blood thinning medications.

Bottom line remains that seaweed is a powerful addition to your diet. Low in calories and rich in nutrients it is easy to obtain in Asian markets and some regular grocery stores and health food stores.

So there you have it. All healthy and tasty edibles are not pretty to look at but sure do “pack a punch.”

If you can think of any types of “medicine from the ocean” that you think we should have included, drop us a line in the comments below and it will be much appreciated.

Also, if you don’t, we’ll cleave you to the brisket. Should I Use CBD Oil??

The Best Things to Boost Your Immune System

10 thoughts on “Medicine From the Ocean | Eat Your Seaweed!”