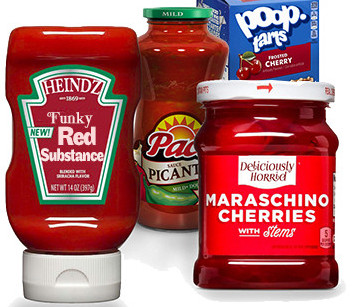 Are Food Dyes Harmful, In General?

Well, there are 3 food dyes (Red 40, Yellow 5, and Yellow 6) which have been found to be contaminated with Benzidine and / or other carcinogens. It seems any synthetic food dye should be avoided, and this wouldn’t be difficult if one steered clear of processed foods. Red dye #3 is also very bad, but Red dye #40 is what we will be focusing on here, due to it’s being significantly more harmful than other colors of food dye, and being by far the most widely-used.

What Is Red Dye 40? – Red Food Dye Side Effects

Red dye 40 is an artificial food coloring made from petroleum and used in many foods you will find in the grocery store, particularly in highly processed foods, which we will list, shortly. Red dye 40 is otherwise known on food labels as:

Some red food dye side effects known to occur are:

What Is Red Food Dye Made From?

It used to be made from coal, believe it or not. Now red food dye is made from petroleum. And squashed bugs. No, I’m not joking. Actually, red food dye has been made from squashed bugs for quite a long time. Starbucks experienced some controversy awhile back when it came out that some of their drinks were made with “cochineal extract”. They have since stopped using it.

When reading ingredient labels, as well as cochineal extract, also look for both carmine and carminic acid, to know whether 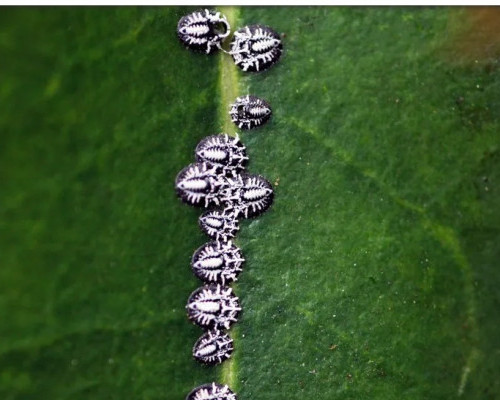 or not you are about to eat bugs. Personally, I would much rather eat bug guts than the stuff that might give me thyroid cancer. Actually, I am totally okay with nothing I eat even being neon red in color. Or my chocolate pudding being green, which it is, before they add red food dye 40 to it.

Is Silica In Supplements Carcinogenic? | Why Is It In Them?

What makes red dye harmful are mainly carcinogens like benzidine.

But actually, dyes made with cochineal extract (ground up bugs) have been found to cause anaphylactic shock, which is a very serious allergic reaction. Fortunately, scientists are looking at new ways to create healthier, natural ways of coloring poisonous food and drugs. One of them is edible spray paint for food. Thank God!

Sounds like I’m making some of this up, doesn’t it? I’m not, though.

Any foods containing red dye 40 are supposedly not allowed to be sold in the US if they do not fall into one of the following categories:

So why can it be found sprayed on fruit and potatoes…? Hmm.

Is Fluoride Good or Bad? | How to Slowly Poison Someone

The FDA also states that any foods containing red dye 40 need to include it in the list of ingredients. However, they do not regulate the quantity of synthetic dye that can be in these products.

Artificial food dye is classified as being vegan. Of course, something being considered vegan does not automatically make it good for your health. I think lead paint is also vegan, but I’m not certain.

Some foods with red food dye may be obvious, and others not so much. But even products that are not red in color often contain red dye 40. And there are a lot of them. Here is a list of foods containing red dye 40:

Is It Unhealthy to Season Food with Salt Or Is This Another Lie?

Foods with natural food coloring should have that coloring listed in the ingredients, and those ingredients will likely be 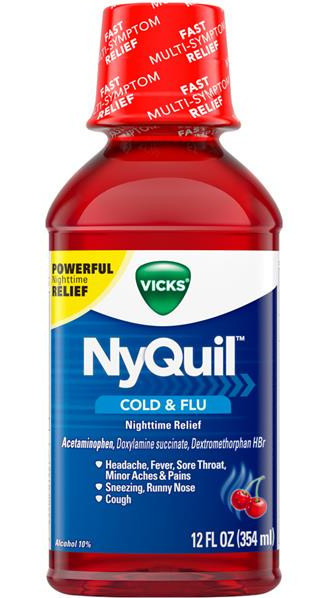 recognizable to you as having come from actual foods. For example, beet juice and turmeric.

Medications are products, and the manufacturers want them to look appealing so you’ll buy them; just like why they dye manufactured food-resembling substances. You will find red dye 40 in drugs like cough syrups, but also in the pretty coatings they put on tablets and caplets. Again, this is purely decorative and psychological.

This website will shock you with its huge list of pharmaceutical products that contain large amounts of food dyes, particularly the red stuff. And particularly the stuff for children. As if the stuff wouldn’t be poisonous enough without the red dye being added. The website is also an encyclopedia of shocking facts about red dye 40 and where you’ll find it.

Around 8 percent of children with Attention Deficit-Hyperactive Disorder (ADHD) in the U.S., Canada, the U.K. and Australia are reported to have behavioral symptoms connected with synthetic food coloring, according to 34 studies published in the Journal of the American Academy of Child and Adolescent Psychiatry. Artificial dyes, particularly red dye 40, according to research, can cause behavioral issues in children, including impulsivity and hyperactivity. This is due to these food dyes causing chemical changes in the brain. When synthetic food dyes were restricted, according to these studies, significant improvements occurred in these children’s behavioral symptoms.

Red Dye and Autism In Children

Yes, the documented evidence is scarce (or at least somewhat concealed), but does exist for a relationship between red dye and autism. I guess it is true that if you want something done right, you have to do it yourself…

The fact is, there is enough evidence of artificial food dyes being bad, overall. So why continue to consume them or let your children eat things that contain dangerous amounts of them?

Please read this lady’s story of her child’s behavior before and after eliminating food dye from his diet.

Why Is My Child So Overweight | High Fructose Foods List

Reproductive issues can result from consuming a lot of red food dye, as can allergic reactions (like hives). Other colors of food dye, including red dye 40 have shown to cause testicular, thyroid and bladder tumors in mice.

Red food dye causes cancer as well, but so do many other things people consume, daily.

Here is a downloadable PDF for you: Summary of Studies on Food Dyes by the Center for Science In the Public Interest

So, you have hopefully learned some things you didn’t know about food dyes, and red dye 40, in particular.

As a rule, with the evidence we do have, we should become more aware of what foods contain red dye 40, as well as artificial food dyes, in general. Then, it would seem to me, if we stop consuming these things, we will be much better off. Not just because of the toxicity of the dyes, but anything, including pharmaceuticals and cosmetics, etc. that contain these dyes, tend to be bad for you already.

We have seen what red dye is made from and what makes red dye 40 harmful, as well as the links between red dye and ADHD and autism, and other afflictions. But we should watch out for the other artificial food colors, as well.

Toxic food dyes may not be the worst thing we need to watch for in this day and age, as far as the safety of what we consume, but it is a significant thing to be aware of and limit, in my estimation. It all adds up!